The best new public library in the world 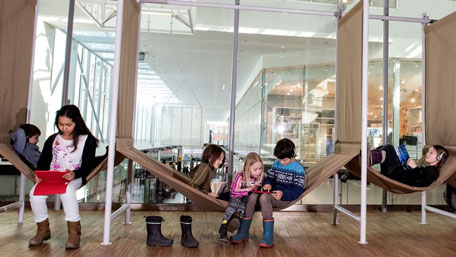 Sweden has the best public library when it comes to architecture, interior design, the use of new digital technology, and engaging with local citizens in its activities.

And it did when the panel of judges for the International Federation of Library Associations (IFLA) selected the Kista Public Library in Stockholm as the prize winner at its annual meeting in Cape Town, South Africa out of a total of five nominated libraries from, respectively, Spain, Kenya, Australia, New Zealand, and Sweden.

The panel of judges concluded that the Kista Public Library, which was designed by Wester + elsner Architects and built in a shopping centre in central Stockholm, is a sustainable project “in which the architecture is playful without being locked into a particular age group. The architectural solutions provide extreme flexibility, and new functions can easily be incorporated to meet the future needs of users.”

Morten Lautrup-Larsen, Deputy Director, Danish Agency for Culture is pleased that, with the establishment of the award, Denmark is helping to encourage the international spread of fundamental democratic values through public libraries: “The Kista Public Library accommodates the fact that the local population is a complex group; and, with an open, inviting architecture and creative use of IT, it draws in many different users. This is commendable.”

Public Library of the Year Award launches
The hunt is once again on to discover the world's best public library.

Systematic – Public Library of the Year Award 2015
The prize - with profiles of the five nominated libraries.