No books, lots of ideas 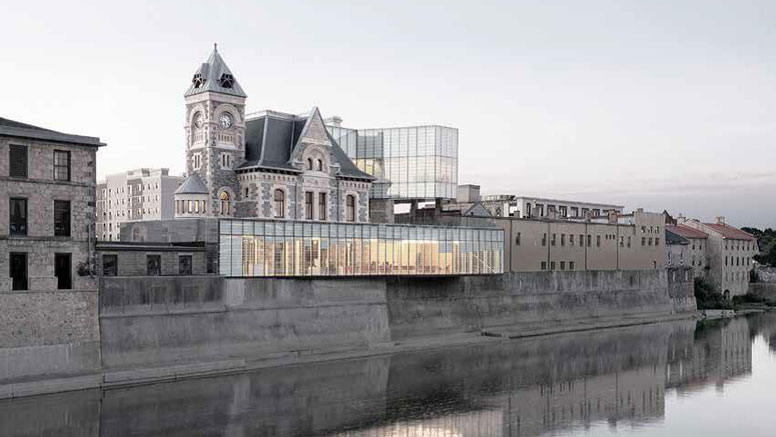 An exchange of new and old

Anchored on the bank of the Grand River in Cambridge, Ontario, the project reignites a landmark 1885 masonry post office that had fallen into serious disrepair, and adds a 9,000-square-foot transparent pavilion that wraps around the original building and stretches out over the water.

The Idea Exchange Old Post Office is an emblem of advances in communication technologies in its transition from post office to digital hub, and of the corresponding transformation of the Cambridge library system, which in 2015 rebranded itself as the Idea Exchange.

Rhythmic window openings in the old building are now entrances into a fully-equipped Reading Room Cafe, accessed by bridges that echo the bridges over the river. The openings in the floor allow natural light from skylights overhead to reach the lower level, and also connect the activities below to the heart of the building.

On the lower level, users can take advantage of a suite of creative studio spaces. There is a black box theatre, film and audio recording suites, laptop dispensing and gaming areas, and musical instruments are available for recording and performance. 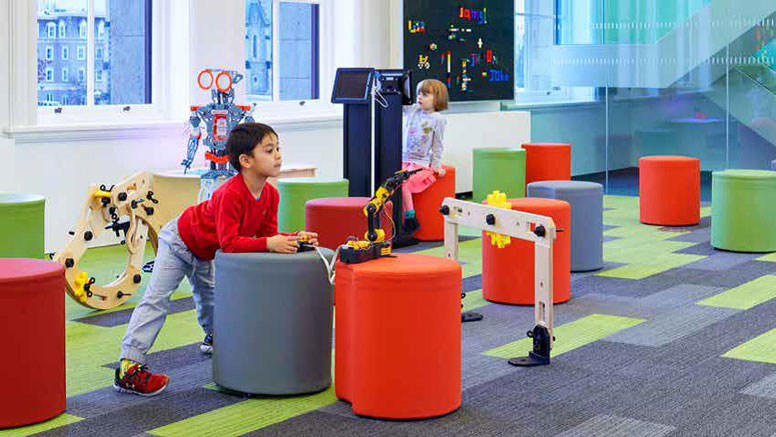 The second level is a children’s Discovery Centre, a single large bright room equipped with smart tables, robot building kits, and built-in feature walls with Lego, Lite Brite and magnets. In keeping with the mixing of old and new, a floating glass boardroom/teaching space and a large exterior rooftop terrace and green roof overlook the river.

One of the greatest pleasures of the building is the attic Makerspace—an all-white space that soars to a peak, and is braced by an elegant arrangement of star-shaped steel trusses, now adapted to hold strips of lighting. Between these trusses the architects have created a fully-equipped studio outfitted with a laser cutter, 3D printers, soldering stations, vinyl cutters, irons, sewing machines, and wood and metal workshop tools.

Cambridge is a small city, but it has a rich architectural and library heritage that provides context for this project. Nineteenth-century libraries used classical architecture to show the value placed on knowledge and ideas. With their re-imagining of the Idea Exchange Old Post Office, juxtaposing brick and slate with glass and metal, architects RDHA have made the same statement in an updated architectural language, and shown the value in merging the historical with the contemporary. And while the Idea Exchange Old Post Office is bookless, the Idea Exchange Queen’s Square branch, with an extensive book collection, is only a short walk away.