Finland's recent exhibition at the 2018 Venice Biennale was a tribute to public libraries and library architects. 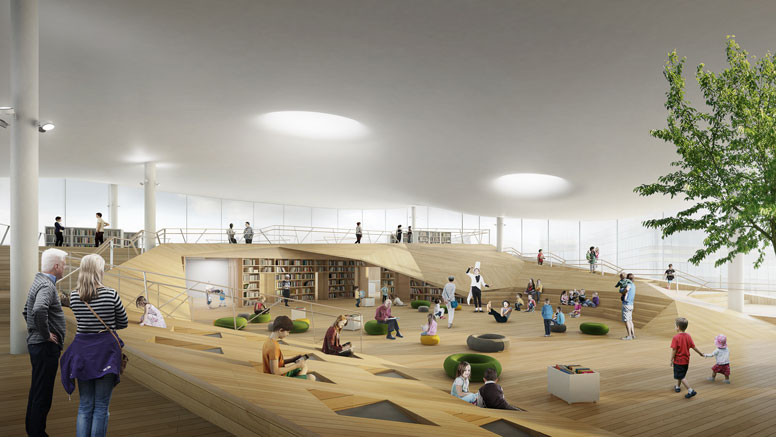 Finland’s exhibition, titled Mind-Building, explored the development of Finnish library architecture through time, with seventeen library buildings leading up to the opening of Oodi Helsinki Central Library planned for December 2018.

“Libraries are the cornerstones of a civilised, forward-looking society,” explains curator Anni Vartola of the ideas behind the exhibition. “In Finland, libraries have introduced readers to our literature, spread information and knowledge, attracted young people away from the streets, taught us to use the Internet, and facilitated and equipped us to be active and autonomous citizens. Our architects have given the library its visual form.”

Rikhardinkatu Library in Helsinki from 1881, designed by architect Theodor Höijer as Finland’s first public library building, begins the story together with Kallio Library from 1914. The latter was recently reopened after renovation and renewal works.

Although built at different eras, Viipuri Library in Vyborg, now Russia (Alvar Aalto, 1935) and Töölö Library in Helsinki (Aarne Ervi, 1970) both represent white modernism and confidence in the future. Viipuri Library was the first Finnish library to have a dedicated children’s section, and Töölö Library led the way with its music section. Both libraries have been restored in the 2010s by architect Tapani Mustonen.

The 126 page descriptive guide that accompanied the exhibition [see link on right] takes the story up to the present day with a view into the library of the future: Oodi Helsinki Central Library (ALA Architects) due to open to the public in December 2018. In addition to peaceful immersion into books, the new central library will be a place for active citizenship, encounters and activities. Oodi will be a non-commercial public space open for everyone, proudly taking its place in the node of parliamentary and cultural institutions.

The Pavilion of Finland unveils Mind-Building on 24 May
Full description and background to the exhibition from ArchInfo, the Architecture Information Centre, Finland.

Mind-Building catalogue
The history and architectural development of Finland's libraries.

Why Finland is home to the world's most radical libraries
Is there any other nation that loves its libraries as much as Finland? A feature from CNN Style.

Finland has the best libraries
A guided tour of the diverse services provided by the libraries of Espoo, Finland's second largest city.