The new Charles Library at Temple University, Philadelphia, has opened its doors for the start of the Fall 2019 semester. 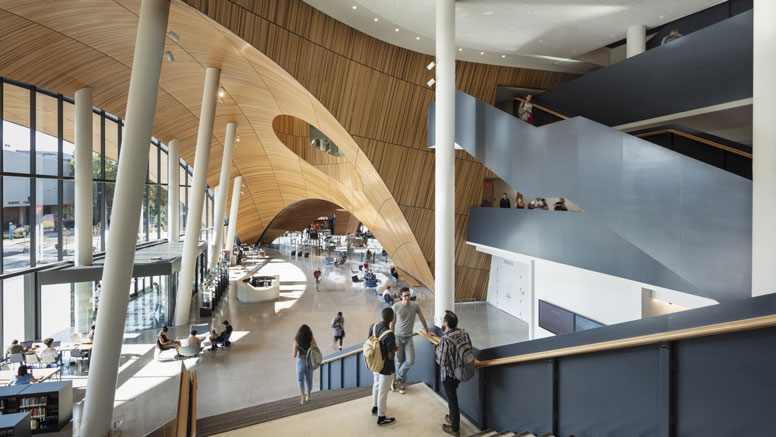 Sited at the intersection of two major pedestrian pathways, Charles Library anchors a new social and academic heart for the university’s diverse student body of over 39,000.

Within its dynamic urban context, Snøhetta’s design, developed in collaboration with Stantec, reinterprets the traditional typology of the research library as a repository for books, integrating the building with a diversity of collaborative and social learning spaces. And in offering more than double the amount of study spaces than its 1960s predecessor, Paley Library, the 220,000-square-foot library anticipates welcoming over 5 million annual visitors.

The building’s arched entries and expansive plazas extend a welcoming invitation to all visitors, and while its unusual geometry expresses a distinct identity, its massing is carefully attuned to the scale and materials of its neighbours.

The lobby’s domed atrium offers views to every corner of the building, serving as a wayfinding anchor and placing the user at the centre of the library’s activity. An oculus carved into the expansive cedar-clad dome allows light to pour into the lobby from the uppermost floor, connecting the terminus of the library back to its beginning.

The steel-clad main stair is immediately visible from the entry as it winds up to the highest level of the building, inviting people to climb upwards. As people move through the building, this visual and physical connectivity allows them to maintain their bearings and encourages usage of all of the building’s resources.

Access to the library collection is stored primarily in the high-density automated storage and retrieval system (ASRS), affectionately termed the ‘BookBot.’ At fifty-seven feet tall, it spans three levels of the building and currently stores 1.5 million volumes with a capacity of nearly 2 million, allowing holdings previously housed in off-site deep storage to be relocated on-site. By drastically reducing the space required for book storage while also expanding access to the library’s collection, the BookBot enables increased space for collaborative learning, academic resources, and individual study space.

The library’s design houses multiple partner programs and academic resources under a shared roof, while responding to the demonstrated need for increased seating. While the library offers a uniquely diverse space program tailored to the emerging needs of contemporary students, it also offers the focused research experience of traditional academic libraries.

Snøhetta’s New Library for Temple University Is a Soaring Ode to Knowledge
Article and review in the Architectural Digest.

The design of the Charles Library, explained
The inside story by The Temple News.