The challenge was to create a contemporary library space in a historic church setting, a challenge admirably met by Opening the Book. 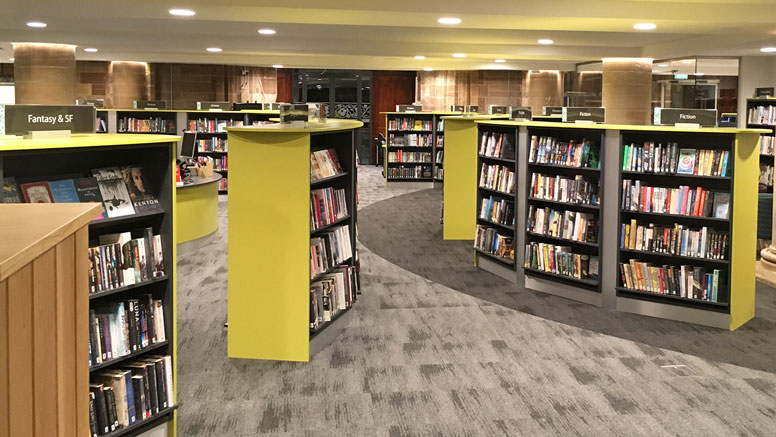 A new life for a historic building

Opening the Book first visited St Mary’s Church, Lichfield, in 2016 to consider the feasibility of the library being part of a larger refurbishment project. The space was not, on first impression, very promising – it was dark, with low ceilings, lots of barriers and huge pillars which had been truncated by the extra floor added into the nave.

But then we entered the chapel area with its magnificent stained glass window and suddenly the building opened up. This space really was beautiful – now the question was, could it be a library? How could we make the low-ceilinged area more attractive? And how could we best use the chapel, given that listed features such as pews and railings must remain, and anything in front of the main altar space must be movable to allow the annual mayor-making ceremony to take place?

The commitment of everyone involved to breathe new life into this building carried us through the next two years of planning and overcoming obstacles. The library team, led by Catherine Mann, Libraries and Arts Manager, saw the potential from the outset, St Mary’s Guild provided the vision for a new cultural space and local architects, BHB, solved the problems of internal heights and access with a wonderful walkway between the nave and the chapel that looks as if it’s always been part of the building fabric.

The result is one of the most successful projects we have ever been involved in. In the 4 months since opening in January 2019, visitors have doubled from 50,000 in the old library to 100,000 in the new one and new members have also doubled. Most pleasing of all to staff who do a great job of making the books look good, issues are up by 18% - and this in a footprint considerably smaller than the previous library.

Follow the story via the link on the right > 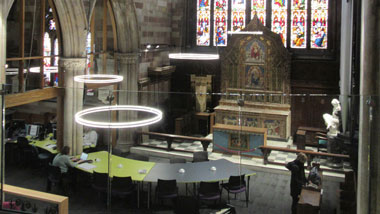 Lichfield Library at St Mary’s Centre
The Library Design Case Study and image gallery on the Opening the Book website.