A vision for the University of Birmingham

Joe Holyoak, writing in the Birmingham Post, brings a valuable historical perspective to the current vision for the campus and its new £37m library. 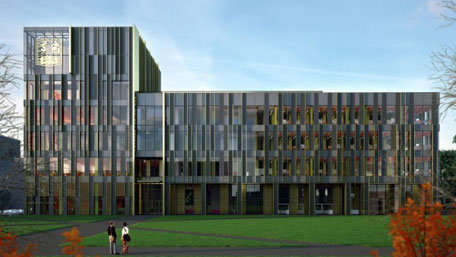 We previously reported on the go-ahead for the new library at the Birmingham Edgbaston campus, amid some controversy around the proposed 'contemporary' design (see link below). Now Joe Holyoak, city-based architect and urban planner, gives a useful insight into some of the historical issues surrounding the development of the campus and its library, and looks at the proposed architectural features of the new building.

He writes: 'Landscape architects are currently being invited to compete for the commission to design the new space that will be created. It will be a colossal space at the heart of the campus, 365 metres long (twice as long as Centenary Square), with the new library occupying a part of one side of it.

'With the exception of the new library and the original semicircle, none of the adjacent buildings were designed to relate to this space... The Edgbaston campus is not known for its architectural uniformity, and the new library will add another distinctively different element, in a very prominent location.'

£37m campus library for Birmingham University
The University of Birmingham is to go ahead with building a £37m new library building at its Edgbaston campus.

21st century library will revive a century-old vision for campus
Read the full article in the Birmingham Post.