The Library of Birmingham: engaging the community

The new Library of Birmingham will have a huge impact on the people of Birmingham and the region. It was important to engage the community at every stage.

When it opens on 3 September 2013, the Library of Birmingham (LoB) will be a major new cultural destination. Integrated with Birmingham Repertory Theatre, it will bring together the written and spoken word and be a hub for learning, information and culture. As a centre of excellence for literacy, research, study, skills development, entrepreneurship, creative expression, health information and much more, the Library of Birmingham will change people’s lives. 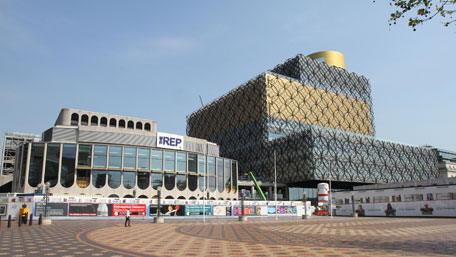 To ensure that the Library of Birmingham meets the needs and aspirations of all the diverse communities of the city, Birmingham Library and Archive Services undertook a series of community engagement and consultation exercises. Since 2009 we have engaged over 6,000 customers and potential customers in each of the key development points.

The people have their say

When the concept design was first released we ran a series of focus groups and drop-in sessions on how people could interact and engage with the design. 1,264 members of the public were engaged over a six week period. We used four methods to engage people to ensure ease of access:

1. A series of planned and advertised public focus groups
2. A series of pre-arranged specific interest focus groups
3. Face-to-face public engagement within the Central Library foyer
4. A web presence enabling members of the public to have an input online.

We engaged with 1,282 people over a six week period to explore the interior design finishes. We created an informal environment featuring an exhibition within the library foyer, encouraging people to talk openly to staff.

Physical examples of proposed materials, including lighting samples,
ceiling and flooring finishes were on show to touch and feel, along with images of the interior concepts and an architectural model of the Library of Birmingham. The feedback received ranged from direct comments concerning the exterior design to how the library will be staffed; from the use of the land of the present library to the environmental sustainability of LoB.

As a result of the exercise we laid the proposed floor tiles within the library foyer to determine how they would wear and how easy they would be to clean. Through this consultation we have been able to choose a floor tile that will be durable and look clean for many years to come.

Within the Library of Birmingham we aim to create a ‘youth space’ that young people can take ownership of and feel at home in. We engaged 160 children and young people over three weeks during the summer holidays to help us determine how the space should be defined.

We received the help of a young library user to help us design and manage a Facebook account, the ‘Libe Lounge’, which received positive comments from across the country. The majority of responses proved that an informal, comfortable, chill-out space with state-of-the-art ICT freely available was the most important requirement for the space.

Within the design of the Library of Birmingham are two outdoor terraces. We set up a series of 12 drop-in sessions over three weeks to talk to members of the public about how they would like to use these spaces and how the needs of local communities can be reflected in the design.

We engaged 241 people who showed a preference for green terraces planted with a range of multi-sensory plants and flowers with different scents and colours with an area to sit, relax, read and socialise.  People said they also wanted a wide range of activities and performances for all age groups in each of the different public spaces with performances by the REP and community groups.

Through external funding from the Regional Innovation and Efficiency Programme we were able to create a ‘virtual Library of Birmingham’. Built in Second Life people can take a complete tour of the library, exploring how each floor and terrace looks and feels. This has been showcased to staff and public in community libraries and in Central and formed a major attraction among the city’s Artsfest activities. The Virtual Library of Birmingham is still an attraction for engaging people in the building, looking at how people will move through the buildings and the different ambiences which can be created in different areas.

A new LoB website is due to be launched very soon. This has been through a series of intensive staff and customer focus groups to ensure it is easy to navigate and that we are loading the right information and content for all our users.

The faces of Birmingham

Throughout the last 3 years we have worked closely with local schools and youth clubs to engage children and young people in the development of LoB.  These have included:

We have worked closely with the Youth Service and have gone to many youth clubs and to charity organisations across the city to engage young people and discuss LoB and its development.

We have also engaged many specific interest groups to ensure all of the communities within the city are engaged in LoB and that the development meets the needs of all our users. These have included:

These groups, among others, have played an important role in the development of the site, from helping us with wayfinding to how sounds travel through enclosed spaces.

There is a ‘Face’ for every letter of the alphabet, representing the many values of the Library of Birmingham and helping to bring the new building to life for others. As real people with real passions, the Faces embody the variety of services, facilities and possibilities that the Library of Birmingham will provide to the city’s residents and the wider world when it opens in 2013.

From now until the Library’s opening, and beyond, the Faces will act as ambassadors within their own communities and networks to help spread the word about the library to Birmingham and the wider world.

Rewriting the Book: The Library of Birmingham
Link to the LoB website, with further links to videos, the library design and design team, photos, blog and more news.