The Hive scooped another impressive national award at a prestigious event in London last week (Thursday, May 31). 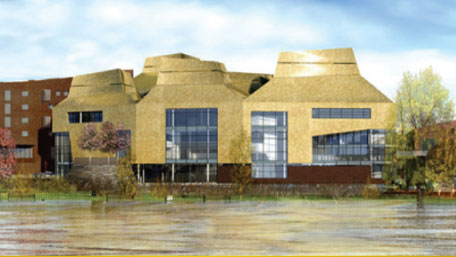 With just weeks left until its grand unveiling, Worcestershire's new joint public and university library, a joint project between Worcestershire County Council and the University of Worcester, left the esteemed Partnership Awards 2012 with the 'Best Sustainability in a Project' honour at a glittering ceremony in London's Park Lane.

Eco-friendly technology at The Hive

The iconic new building, which sucks water from the River Severn as part of a high-tech, eco-friendly ventilation system, beat off competition from other partnership projects from across the UK.

Adrian Hardman, Leader of Worcestershire County Council, said: "This is a wonderful achievement and is further evidence of the high regard The Hive is held in nationwide. The building is designed to be modern and cutting edge and to embrace new eco-friendly technology and this award is wonderful news just a few weeks ahead of The Hive's opening."

As well as a joint public and university library – the first of its kind in Europe – The Hive is also home to the county's Archives and Archaeology Service, one of the largest children's libraries in the UK, a contemporary business centre with meeting rooms and a conference facility, and the Hub customer contact centre. The project has already been credited with an international award for its innovative design.

The Partnership Awards 2012 celebrates innovative partnerships projects across the public and private sectors and sought nominations in just under 20 categories. For the first time this year nominations from international projects were welcomed.