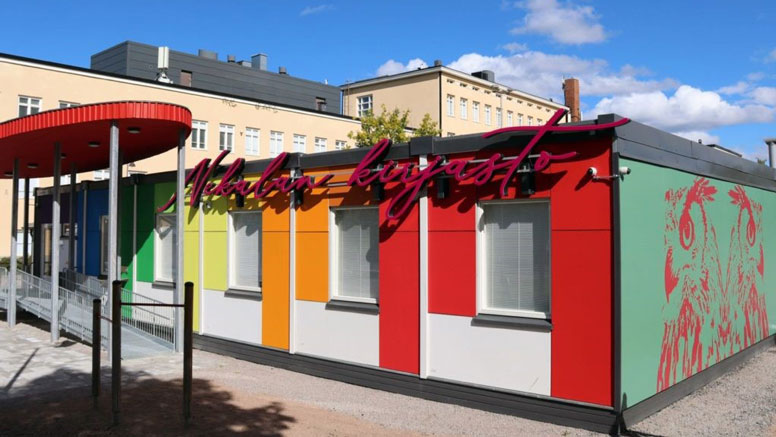 The library is the living room of the people. We’ve been saying this since the early 1990s. But then why do they often look like offices? I wouldn’t want to step on a grey plastic floor in my home and sit in an uncomfortable standard supplier chair at a white table. I also want life at home, and at the same time a little home in the library space. And of course always a little pink.

At the South African IFLA Conference in 2015, South African Architects Tsai Design Studio spoke about the container libraries they had designed for some African countries and elsewhere where building fixed libraries is out of the question. This sparked a real eureka moment – the idea that something similar could be considered for Finland as well.

Containers have been set up for the use of schools and kindergartens in the past, but for a library, no such movable rental container had been built in Finland before. Actually, they are not containers, but portable modules, but the building is still referred to as a container library.

There are 15 branch libraries in the Tampere City library network. The city of Tampere has 238,671 inhabitants and it is the third largest city in Finland. Nekala is one of the smallest libraries in our network, but the Härmälä library and the Sampola regional library are quite close.

When the Nekala Library had to be closed down in 2018 due to indoor air quality problems, we tried to find a new place for the library building but there was no free plot in the area. I then threw the idea of a container library to City Facility Services. It was received with enthusiasm and gave rise to the idea of implementing a portable container library. 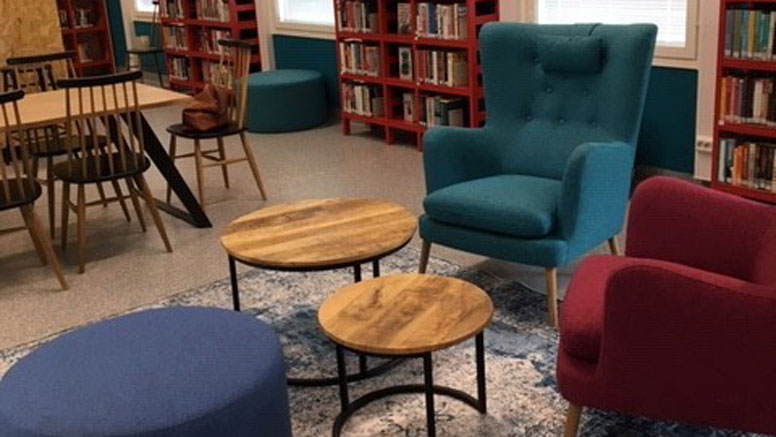 For interior design, a competition was organised for architecture students, which provided useful ideas and partly the final interior design. We furnished the library ourselves instead of subcontracting. The initial idea was to make wide use of recycled materials but that was deemed quite difficult due to regulations. Some detailing of the interior such as metal parts on the book shelf ends follow this design direction. The book shelves are based on the design of the winning entry in the architectural competition and custom built at the Wood Tech of City Facility Services.

All year round self-service

Nekala Container Library is the first year-round container library in Finland and the first library working completely on a self-service basis in Tampere. Self service means that you can open the door with your own library card and PIN code. There are no permanent staff in the library. The design of the container library has required courage, an innovative approach and trust from all parties involved. In our opinion, the library is very suitable for Nekala suburb and its surroundings, the residents' own multi-purpose space, which with its homely interior entices people not only to gather but also to take care of the library together. It is a community living room and a work space with a small but comprehensive library collection and has all key library services for use.

The library is quite small, 145 square metres, but it contains everything you need in a library. You can access the internet through an open wifi, work, study, print and scan, read magazines and meet people. Of course you can also borrow and return books, make reservations and pick them up. The city-wide floating collection moves between libraries daily. School classes also use the library during the day as a learning environment. For residents of the area, it is free to use, for example, for meetings or small events. The library has camera surveillance and, if necessary, staff on site. For the most part, however, it operates on a customer self-service basis. The opening hours are extensive: you can visit Nekala library 7 a.m. to 9 p.m. Sundays to Thursdays and 7 a.m. to 6 p.m. Fridays to Saturdays. The pink signage welcomes residents and visitors to enjoy the community space.

"Nekala Container Library is the first year-round container library in Finland and the first library working completely on a self-service basis in Tampere."