Controlled access to library collections, computers and meeting spaces outside normal staffed hours provides libraries with the opportunity to extend their opening hours to more visitors. 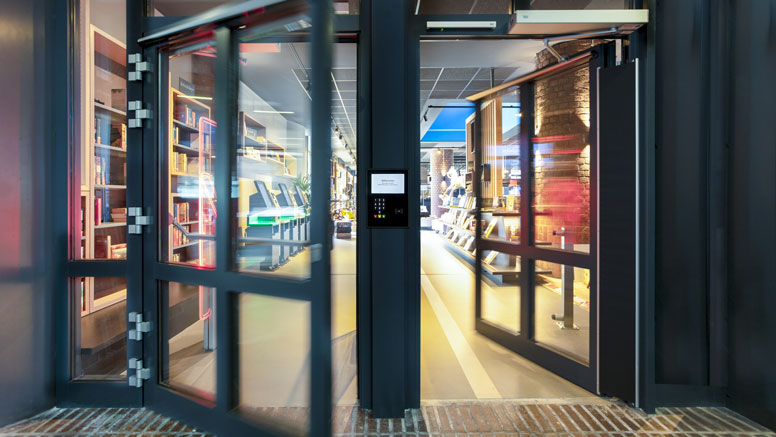 Libraries are a public treasure trove of information and resources. They offer everything from collections of physical and digital materials, public-use computers, and meeting spaces, to high-quality programming designed to educate and inspire. The best libraries act as hubs of their communities – the last true public places where everyone is welcome to come and explore, and no purchase is required or expected.

Though public libraries don’t charge a ticket price, the fact remains that they are not free to run. Maintaining library buildings, collections, Wi-Fi, and databases requires the same investment of taxpayer funding regardless of whether those libraries are open to the public 10 hours a week or 70. The challenge then is to maximise communities’ access to the resources and services their libraries provide.

open+ is designed to allow libraries to extend their open hours at minimal cost and provide communities extended access to library materials, spaces, and resources at their convenience.

Some libraries are more equal than others

Many library systems are stuck offering inconsistent or limited hours at smaller, rural branches in order to meet the demands of their larger branches. This was certainly the case at Hamilton Public Library in Ontario, Canada. The library system encompasses large urban branches that serve tens of thousands as well as branches like Freelton, which serves a community of just 2,500. With open+, Hamilton was able to extend hours from 17 to 60 per week.

When open hours vary from branch to branch, it can be difficult for users to remember which branches are open on which days and at which times. open+ provides a way to keep open hours consistent, eliminating confusion, reducing frustration, and ultimately providing better service.

Small, single branch libraries across the globe are implementing open+ to offer their communities library services that rival large cities. In Belgium, the Bree Library, which serves a population of 16,000, was able to increase its open hours by an astounding 180%. Providing a convenient and consistent experience for users, Bree Library is now open from 10AM – 10PM, seven days per week! 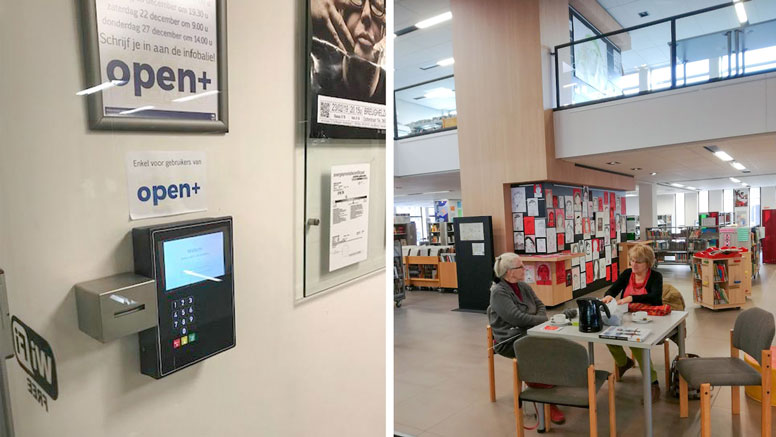 It’s not just small communities that struggle. Exploding population growth can pose a similar problem. In Ventura County, California, Nancy Schram, Library Director, knew it was time to build a library to serve the burgeoning east side, but the funding just wasn’t there to keep the new branch open often enough to adequately serve the neighbourhood. Using open+, the new library was able to increase its open hours from 40 to 60 per week and consistently open every day at 8AM, soon to be extended to 6AM.

Over 850 libraries worldwide benefit from open+

open+ is a comprehensive solution that allows libraries to control access, security, and activity within libraries during unstaffed hours. The system integrates with libraries’ existing ILS/LMS and allows announcements, lighting, and other physical library needs to be controlled from one centrally managed hub.

Since its inception in Europe over a decade ago, open+ has been implemented in over 850 libraries worldwide. The solution is flexible and can be configured to offer access to the entirety of a library, or just a portion, allowing libraries to choose the scenario that meets the needs and comfort level of their communities.

Silkeborg Bibliotekerne in Denmark has been using open+ since 2007. In place at traditional library branches as well as those located in shared community spaces such as sports centres and community centres, open+ has allowed the Danish library system to add more than 206 hours of library access for residents.

Many library systems begin by installing open+ in just one location, where the success of the solution often leads to implementation system or county-wide. Such is the case with the UK’s South Gloucestershire libraries. After seeing the results at their Bradley Stoke branch, the library installed open+ in nine additional branches, leading to a 166% increase in opening hours.

Though theoretically, open+ could be used to keep libraries accessible around the clock, most libraries choose to use it to offer extended hours, both before and after staff are on site. Many retired people enjoy coming into the library in the early morning hours to read the paper and socialise. Late evening hours offer students a quiet place to study with access to Wi-Fi, as well as making it possible for patrons with non-standard work hours to take advantage of the library’s materials and resources.

Not a staffless library

open+ is designed to complement staffed hours, not replace them. Librarians and library staff are the lifeblood of community libraries. Their expertise and passion are irreplaceable. open+ is not a substitute for professional staff, it is instead a way to improve service and provide flexibility for staff to focus on high-impact activities, get out into communities, and participate more fully in outreach.

The mission of libraries extends far beyond the walls of any particular branch. Using open+ to allow access to the library building allows librarians and staff to get outside that building, offer story time in the park, or programming at other community gathering places, and introduce a whole host of new users to the bounty the public library has to offer.

The economic downturn in 2008 forced many libraries to reduce open hours and services. Today, more than a decade later, the average number of hours has still not returned to pre-recession levels. Meanwhile, consumers’ experience and expectations have changed radically. We live in a world of on-demand, instant gratification. To compete for use and attention, modern libraries must find a way to meet the needs of users in the most convenient way possible. The open library model and open+ offers such an opportunity.