Warwickshire's Let’s Make Spaces allow people of all ages and digital skill levels to get hands-on with the latest technology. Ayub Khan explains.

Warwickshire’s library buildings are a mixture of ancient and modern. We increasingly share premises with other services, so sensitivity is always required when we adapt library spaces for new purposes - both architecturally and in consideration of our partners. Our older buildings present particular challenges - and often additional costs.

Despite having to make ‘austerity’ savings over recent years, Warwickshire has continued to improve its library buildings. We have built three new libraries since the recession, completed a major remodelling of Stratford on Avon’s historic library - which now accommodates the Registration service and an attractive town-centre wedding venue - and we are remodelling eight more. We are also looking at new-build for Nuneaton Library, as part of a major town centre regeneration.

In 2018 we opened Let’s Make Spaces in two of our larger libraries, Rugby and Nuneaton, and have recently launched a third in Leamington Spa. Essentially these are glass-walled spaces within spaces - very much part of the main library but where something new, innovative and different is clearly going on.

The Let’s Make Spaces allow people of all ages and digital skill levels to get hands-on with the latest technology - and learn how to use it in fun, creative ways. Makerspaces, or ‘Fab Labs’ as they are sometimes called, can and do incorporate more traditional arts and crafts and equipment alongside techno gadgetry. The Warwickshire emphasis is on making together - fun learning with a social dimension.

The project started a couple of years ago. Staff did a lot of research and visited different models operating elsewhere. The next priorities were to decide on the right model for Warwickshire, develop a business plan and secure funding. We put in a successful bid the Arts Council England’s Libraries Opportunities for Everyone Innovation Fund, with match funding agreed by Warwickshire County Council. The total project budget for the first two Let’s Make Spaces was around £97,000 - plus a County Council commitment to cover costs going forward, as part of the library core budget.

The three key elements of the design brief were that the Let’s Make Spaces should be located on the ground floor, with glass partitions to make them very visible, and they should be flexible enough to accommodate a constantly changing range of techno-kit. The current focus is around coding, robotics and electronics - and virtual reality headsets are particularly popular.

We needed to create the right balance between distinct but not separate areas within each library. To help with this we located transition or ‘taster’ zones, just outside the Let’s Make Spaces. This is where books on science, technology, engineering and maths (STEM subjects) are shelved, making the link between academic study and hands-on digital experience. The taster areas have a screen to help promote the Spaces, and a cabinet where items made using 3D printing are displayed. The space needed to appeal to both a family and adult audience.

The design and simultaneous library refurbishments were undertaken by thedesignconcept.

The Let’s Make Spaces were designed to be used in different ways - for informal self-service, drop-in sessions or ‘discovery days’, one-off or regular activity sessions exploring particular topics, or occasional/regular use by organisations or community groups. This wide remit had implications for the décor and furniture. The design needed to be exciting, attractive and welcoming to both children and adults, to the techno-aware and the simply curious.

The first two Let’s Make Spaces were installed during planned library refurbishments, which both minimised disruption and helped keep costs down. Although different in size both offer the same equipment and facilities. Before and after photos show not only what was achieved but also just how much library interiors are changing. Twenty-five years ago, around 70% of library space was traditionally occupied by books and borrowing points with only 30% for other activities - now it’s the reverse. Flexibility is key to all our refurbishment projects nowadays.

The measure of a good design, in this context, is how much it is used and how comfortable people feel in the space. The Let’s Make Spaces are being used and enjoyed by all kinds of library customers - sometimes all at the same time. Toddlers love playing with robotic toys, and youngsters enjoy making movies using Lego characters. Young people like to explore the latest software and what it can do. There has been plenty of interest from parents - including home educators - who want to keep up with their kids and from older people who just want to know what all the fuss is about. We have even persuaded ‘knit and natter’ groups to try out computerised embroidery.

It has been really encouraging to see how children, young people and adults share their creativity, knowledge and enthusiasm in the Let’s Make Spaces. They help each other out and give each other ideas - which is just what we hoped for. 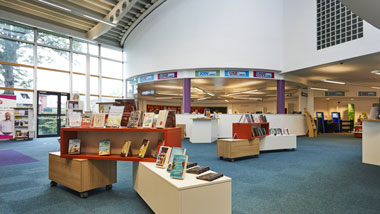