School 7 public library in the city of Den Helder, Netherlands, wins the 2018 award for Public Library of the Year.

Nominees for the award were:

This year’s recipient of the award was announced at the annual meeting of IFLA, held in Kuala Lumpur, Malaysia.

“The recognition means a lot for School 7, but also for the whole KopGroep Libraries organisation. Winning this award shows that in a new building, with an open and functional architecture, you can undertake many activities that are appreciated by the public,” says Jacinta Krimp, Director of KopGroep Libraries.

The winner was selected by an international panel of experts consisting of representatives from the IFLA’s many different member associations. For this year’s winner, it is particularly important that the library is accessible to all the different groups within the larger community.

“We want everybody to feel at home in our library: children, adults, seniors, immigrants and people with language difficulties. School 7 is a real ‘third place’ where you can not only borrow books, but also work, read, take courses or attend activities. You can even get married in our atmosphere-laden theatre, or hold a birthday event in the café. Anything and everything is possible in School 7.”

The Public Library of the Year award is presented each year to a public library that is either newly built or set up in premises not previously used for library purposes. Applicants are assessed on six different criteria, including the extent to which the library considers new digital development, local culture and sustainability. In the case of School 7, it was the criterion of “interaction with surroundings and the local culture” that they considered particularly relevant when they applied to be considered for the prize.

“When we started School 7 we wanted to be able to serve as ‘the living room for the community’ – and we’ve already succeeded in that. People come to the library to read, to work, to attend a lecture or to take part in a workshop. Young people study in our library, and new Dutch citizens practice the language. Enthusiastic volunteers teach children programming, children are often read to aloud, and writers tell about their books. People drink coffee in our coffee corner (the Leescafé), read the paper and meet for a chat. All these facilities are now located under the same roof.”

”Public Library of the Year” is an annual award presented to the best new public library in the world, embracing user wishes and local culture as well as digital development and functional architecture. The award is sponsored by Systematic. 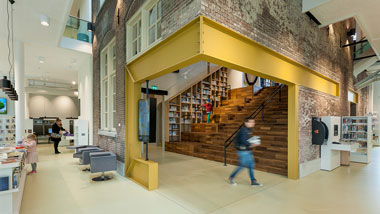 Den Helder public library
Image gallery courtesy of thedesignconcept, part of the Lammhults Design Group who worked on this project.