How are library design awards administered and judged? What purposes do they serve and what contribution can they make to standards of library design? 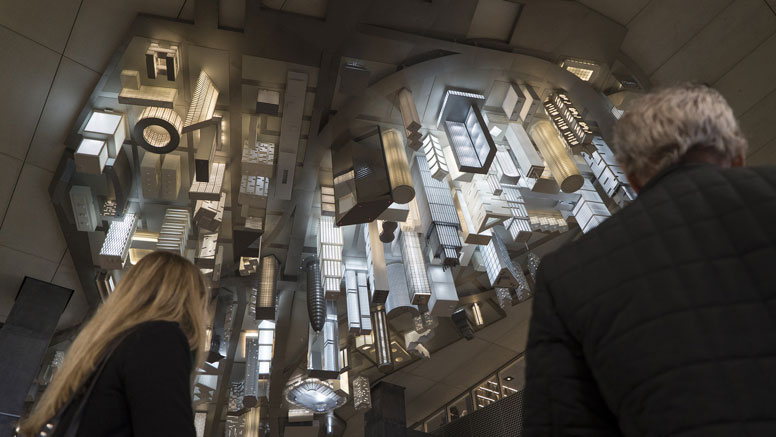 Magic mushrooms, installation on the ceiling of Dokk1, Aarhus, Denmark, voted the best public library in the world

The SCONUL Library Design Awards have been running since 1973 and are now awarded every three years. The aim is to encourage good practice in library planning and design and to celebrate outstanding examples of cutting-edge design. Awards are given on the basis of the functional design of buildings rather than purely architectural merit.

The awards are made by a panel of librarians on the basis of submissions from the libraries and visits to the shortlisted libraries. The shortlist is comprised of those deemed to best meet the judging criteria, which for 2016 were: strategic alignment, design and transformation. Visits take place in spring to allow the judges to assess the libraries’ functioning at full activity.

The School Library Association (SLA) Inspiration Award has been awarded annually to the school library space that shows inspiration, innovation, creativity and resourcefulness in its library design and use. The award is sponsored by Gresswell and LFC, part of the Demco Europe group. It will now take place biennially, with prizes next awarded in both primary and secondary sectors in 2017. Schools submit applications and a shortlist of libraries are visited by a panel of judges.

The Public Library Building Awards UK and the Republic of Ireland, administered by the Public Libraries Group of the Chartered Institute of Library and Information Professionals (CILIP) and An Chomairle Leabharlanna, the Irish Library Council, were last awarded in 2009 before becoming victims of economic recession. A judging panel visited shortlisted libraries and awarded both overall winners and winners in specific categories and latterly there was also a public choice winner, voted on by delegates at the CILIP Umbrella conference at which the awards were presented.

There is a need for a public library design award and Designing Libraries is currently in consultation with interested parties to revive the award.

The American Institute of Architects/American Library Association Library Building Awards are a collaboration between architects and information professionals and recognise exemplary facilities designed by US licensed architects anywhere in the world and are judged by a jury of industry professionals. The awards cover libraries of all sizes in all sectors. The 2016 award recipients are all in the United States.

The biennial competition for the Library Interior Design Awards is co-sponsored by the American Library Association (ALA) and the International Interior Design Association (IIDA). The awards honour excellence in library interior design. Award winners demonstrate excellence in aesthetics, design, creativity, function, and satisfaction of the client’s objectives. The competition is managed by the LLAMA Buildings and Equipment Section (BES) of the American Library Association. The awards grew out of a realisation of the importance of showcasing excellence not just in the fabric of library buildings, but in the design considerations of producing a striking, coherent and functioning interior. They were inaugurated in 2006 and have been awarded biennially since then, except in 2010.

Public Library of the Year Award

The international Public Library of the Year Award was inaugurated in 2014 by the Danish Agency for Culture as part of its Model Program for Public Libraries and is open to new public libraries. The purpose of the program is to develop the library of the future, taking into account among other factors, digital developments, user demands, local culture, and the desire to accommodate diverse population groups with an open and functional architectural expression. Sponsored by the architects Schmidt Hammer Lassen, the 2014 award was won by Craigieburn Library, Hume City, Victoria, Australia.

In 2015, now with a new sponsor, the IT company Systematic, the award was renamed Systematic – Public Library of the Year Award 2015 and won by Kista Public Library, Sweden. The 2016 winner was Dokk1 Aarhus, Denmark which has featured prominently on Designing Libraries.

The 2016 winner was El Pequeño Sol ecological library (The Little Sun Ecological Library), Mexico, which was seen to be a project where sustainability was the soul of the project from conception to delivery.

As can be seen from the Designing Libraries website, there are numerous instances of libraries winning general building design awards:

The prize is regarded as the pre-eminent award in UK architecture. Named after the architect James Stirling and now in its 26th year, the prize is awarded to the architects of the building which is judged to have made the greatest contribution to the evolution of architecture in the past year. The competition has often featured library buildings in its shortlists, as in 2016 with the Weston Library at the Bodleian. Peckham Library, Southwark won the Stirling Prize in 2000.

What are design awards for?

It is clear that there are significant differences between awards depending on the nature of the bodies awarding them and how they are administered and judged.

Librarianship associations such as the International Federation of Library Associations, SCONUL, the American Library Association, often take a lead role in library design awards. They do this as a part of their mission to raise the profile of the profession they represent; to steer current and future thinking about libraries; to disseminate current good practice; to inspire and educate their members and of course in the process to raise their own profile and influence.

Sponsors will want to ensure that they profit from their involvement with an award and may wish their name to be part of title of the award.

Both sponsors and lead organisations may have clear ideas of the criteria to be used in judging the award which will reflect their broader objectives, as we have seen with the SCONUL Awards and with the Danish Agency for Culture’s Model Program for Public Libraries in the case of the Public Library of the Year award.
What contribution do design awards make to library design?

I have already noted the advantages of design awards to the awarding bodies. More broadly awards contribute to developments in library design by:

Who are the winners? Only those who win?

I believe that library design awards have many winners including:

Is an award winning library a good library?

Perhaps the answer is: only if it is a winner to and for its users; if it creates an impact and encourages service development; if it allows a flexible response to change and continues to respond to user needs. I feel that we could really do with a “10 Years In” award for library design.

Do you know or use a library which you feel is an exemplar of good design?

Let Designing Libraries know its details and your reasons and we will contact the library for additional information.

The Hive and Heritage Quay are winning libraries
Both libraries are winners in their categories of the SCONUL Library Design Awards for 2016.

Public Library of the Year Award
The winning library was announced at IFLA in August. The award was made to Craigieburn Library, Hume City, Victoria, Australia.

Dokk1: Impressions of an impressive library
Denmark’s Dokk1 is helping to redefine the concept of ‘library’ as an urban, cultural, creative, community space.

IFLA Green Library Award winner announced
The Little Sun Ecological Library in Mexico has won the award for a library where 'sustainability was in the soul of the project' from the beginning.