Birmingham Central Library closes ahead of the September opening of the new Library of Birmingham. The Mail has a gallery of what was and what's to come. 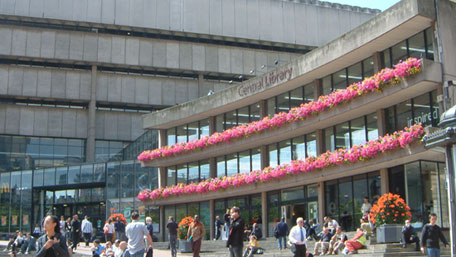 The concrete building, which has remained controversial throughout its forty year history as the centrepiece of an unfulfilled cultural regeneration of the city, has closed its doors for the last time as preparations are completed for the opening of the transformational Library of Birmingham.

The Birmingham Mail in its report quotes the remarks once made by chair of Birmingham’s civic society on the old building, now scheduled for demolition: “This monumental, brutalist incinerator has no place in the centre of our city, flanked by the glorious nineteenth century architecture and sculpture of our other civic buildings.

“Visitors to the city walking through Victoria Square and into Chamberlain Square from New Street are confronted with this import from post revolution Russia and forced to go through a tacky assortment of fast food outlets en route to meetings or concerts in the ICC and Symphony Hall.”

New facilities at the Library of Birmingham include more gallery space which will open up public access to some of the collections for the first time. It will also provide free access to the National Film Archive.

Other facilities will include a new flexible studio theatre, an outdoor amphitheatre and other informal performance spaces, a recording studio, and dedicated spaces for children and teenagers.