Idea Stores: the next generation

The Idea Store concept pioneered in Tower Hamlets is now ten years old. What lessons have been learned - and what still remains to be learned?

In this specially commissioned article, Sarah Godowski, Director of architects Bisset Adams, and Sergio Dogliani, Deputy Head of Idea Store, reflect on their experience. These extracts are taken from the full article downloadable from this page. 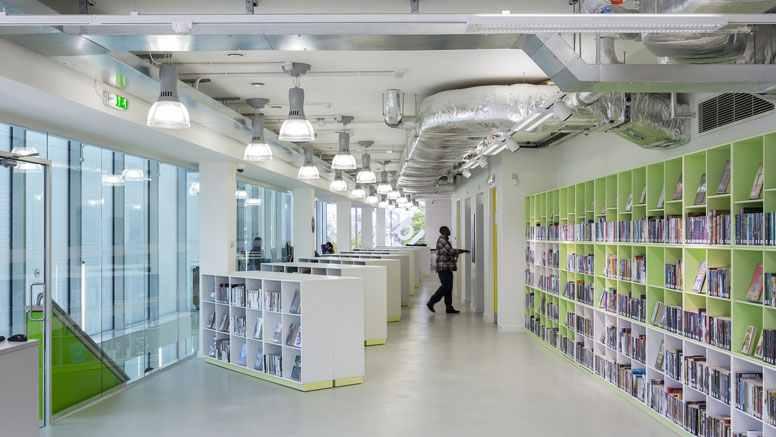 The designer's view
by Sarah Godowski

After the largest-ever public consultation on the future of libraries, the team identified that local people wanted libraries to broaden their remit. Tower Hamlets had recognised their potential and had fixed on the library service as a key partner in a broad learning offer to stimulate regeneration and foster inclusion. They also realised the name ‘library’ meant little to many of the local community to whom the stock of old libraries in run-down buildings had little to engage or offer.

The future
The key to the success of Idea Stores has been to engage with previously excluded audiences, creating a genuinely vibrant community hub of learning, library, business, arts and community events. The café is used for business meetings, the learning labs for everything from language classes to baby massage.

The latest Idea Store at Watney Market follows a new model as a ‘marketplace of information’ with the council’s partners. The library space is spread over three floors with dedicated space for adults, children and young people, and ‘learning clusters’ provide a highly informal learning environment, part of a range of learning opportunities offered in the Idea Stores as well as in partnerships with local schools.

The practitioner’s view
by Sergio Dogliani

We set out with the aim of transforming our libraries to put them at the centre of people’s lives, because that was our mandate from Tower Hamlets residents.

How did we achieve that? First of all by working very closely with like-minded architects Bisset Adams, who were very involved from day one in a new concept, not just a new building – we think it was this marriage of creative minds that resulted in such an innovative project. We then started by relocating our buildings where people were, on the high streets, and by investing in books and IT. We then had to throw away the rule book. Our ‘no rules’ policy has brought in thousands of people who had never been to a library before.

We then had to learn a few tricks from the retail sector. So, longer opening hours, books attractively displayed, customer focused layout design, and competent staff who care.

We continue to live by our values, so we still engage with, and continue to seek novel ways of capturing the attention of users who are increasingly attracted by other offers in modern life.

The secret of success
Many ask us: what is the key secret of your successful formula? If we were to single out a factor, we would say it is the attention we have always put on people (customers, staff), not just on things (buildings, books).

Ten years on, and we still continue to receive many foreign delegations who study our model. As dozens of libraries around the country close or severely reduce their services, can the UK library world learn from the Tower Hamlets model?

Idea Stores: the next generation
Download the full illustrated article by Sarah Godowski and Sergio Dogliani.

"We had to throw away the rule book and try to create a place where mutual respect is the norm."
Sergio Dogliani

"It is now ten years since the first of Tower Hamlets’ ground-breaking Idea Stores opened in Bow, and it’s still seen as one of the best and most exciting library services in the country."
Sarah Godowski