The new zinc-clad design by Teeple Architects for Edmonton’s new library (Canada) has generated criticism on social media. But at least people are talking. 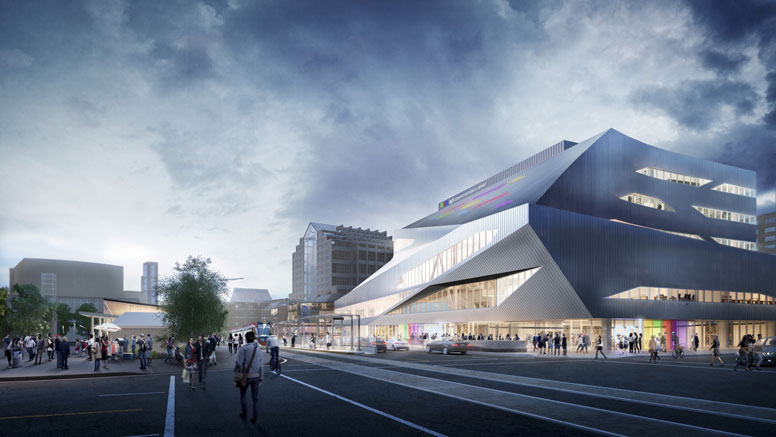 The controversy is mainly around the proposed zinc cladding which makes this futuristic building look a bit like a tank or battleship. The architect argues that the building needs to be seen in its wider functional context – and it’s not built yet.

"It's new and different. People might associate it with more industrial buildings ... even though in Europe it would be seen as a pretty high-end, nice finish material." Zinc cladding has thermal and reflective properties, helping the building meet international standards for sustainable buildings, reports CBC (see news link).

Teeple, and Edmonton Public Library, have a wider perspective:

“This project involves the re-cladding and renewal of Edmonton’s Stanley A. Milner Library, which is located prominently on the City’s premier civic space, Sir Winston Churchill Square. The project involves the replacement of the building’s 1960s pre-cast concrete envelope, the removal of a 1990s addition that compromises the building’s relationship to adjacent civic spaces, upgrades and functional modifications to update the operations of the library, as well as the enhancement of urban connections.

“The intent of the design is to reconsider the existing Milner Library as an expression of Edmonton Public Library’s (EPL) forward-thinking values and civic role. EPL is passionate about sharing, openness, vision and creativity, community and social responsibility. The civic role of the library has evolved such that it is now a key social and creative space in the City. For this reason we have looked beyond the facade to the organization, circulation and spatial order of the library as the key forces that shape its form, function and urban relationships.”