The library, in a deprived area of Oslo, Norway, is rewriting the rules for creating library and social meeting places – with the help of kids themselves.

The library is just for kids, age 10-15, no adults allowed. It’s an idea pioneered at Tio Tretton (‘Ten Thirteen’) in Stockholm, Sweden, and has the same philosophy of working with young people to create a space they can own, an inspirational place to read, learn, meet, eat, explore, express, unfold creativity and feel safe.

In Norway, like many other countries in Europe, the whole concept of libraries is changing from being a place for books – to becoming a place for people. A place where people meet and exchange thoughts and ideas, and collect new information. The books are still important, but not more important than other media. The classical concept of the library is being transformed into the idea of a social space.

Designing Libraries asked Reinert Mithassel, the librarian overseeing Biblo Tøyen, about its origin and the creative input that led to this amazing library.

For kids, by kids

Biblo Tøyen was from the beginning designed to be a library for kids only, including spaces and facilities for makerspaces and the scope to house a lot of different activities – a ‘third place’ where you go when you’re not at home or in school.

When the idea of the youth library was born we gathered a group of kids from the area to listen to their wants and needs. We never asked them what kind of library they wanted, because the word library is full of old conventions, and it’s easy just to imagine rows of dusty books. Instead we asked them, ‘When do you feel good? Why? What kind of environment makes you feel safe? What do you dream of? Where are you happy?’

The answers were many and various, but made a guideline for our further work around some of the keywords that resulted: exploration, discovery, choice, privacy, safe, hang out (girls), gaming (boys), loose parts, changeability... We also gathered information from an architect psychologist who could tell us what our target group preferred in a public space: they want to sit close and cosy up, they want to have an overview, but not get looked at etc. The interior architect of Biblo Tøyen is Aat Vos, from the Netherlands, in collaboration with Artisan Tech, a group of set designers who made and gathered the cool interior, like ski elevators, kitchen truck, gymnastic floor and the recycled materials we used for shelves and tables.

It may be surprising when we say this, but we don’t have an educational purpose. Our job is to inspire the kids, make them feel competent, show them things they didn’t knew existed. They don’t have to do anything if the don’t want to, they can also just come and hang out with a friend. But hopefully they’ll be hooked on some new things while they’re here! We want them to have a great experience. It’s nice to sit inside the engine compartment of a truck and read books, or play chess with your friend inside a ski elevator, or relax on a sofa watching movies!

Making, creating and just being yourself

The maker idea and maker-movement has been very important to us from the beginning. The staff at Biblo Tøyen already have a varied background from different cultural and creative fields. They have also been participating in different maker camps and are constantly exchanging ideas and experiences with different people and fields.

We have 3D printers, where we work together with the kids to explore their possibilities, and teach 3D modelling programs (Tinkercad). Most of the kids know little or nothing to start with, so it’s important for us to take it slow and keep them interested all the way, so they don’t lose confidence in themselves. For instance, this summer the kids could design their own fidget spinners. A very popular activity!

Since opening we have been collaborating with a lot of different people with transferable knowledge. We’ve been working with a group of volunteers to teach the kids coding and run weekly coding clubs. Here they get introduced to simple coding or more advanced use of programming language, micro bits, creating small robots, putting motors on Strawbees straw constructions. We have also been collaborating with a city workshop to introduce the kids to tools such as drills, hammer, saw, and got them experimenting with how to make things stable and solid. The result became a huge tree-hut inside the library, inspired by the Treehouse series by author Andy Griffiths. After all, it is still a reading environment – but a very different one, less ordered, less formal, with the kids in charge of what they do.

Yes, it’s chaotic at times. But bit by bit we have achieved the atmosphere we were looking to create. Our experience is that it is important to make it fun, easy to join, and easy to leave and come back later.

“In the centre of the library is an old Volvo truck, nicknamed Teddy, pimped out with a functional kitchen in the back and a sofa in the hood. Members can read while lounging in a wheelbarrow, work on homework inside a converted tuk-tuk, or discuss group projects in an old ski gondola hanging from the ceiling. The entire library embodies and encourages creativity and imagination.” 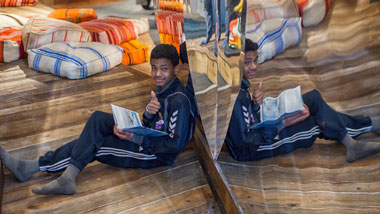 BIBLO TØYEN
The project description by Aat Vos, the creative force behind the original design of the library. Welcome to Biblo Tøyen: Norway’s first youth-only library for kids ages 10 to 15
TheOsloBook, a lifestyle guide to Oslo, visited and sent this report.