Five children’s libraries located within five community libraries in South Birmingham refurbished thanks to a Wolfson Foundation grant – and BookSpace. 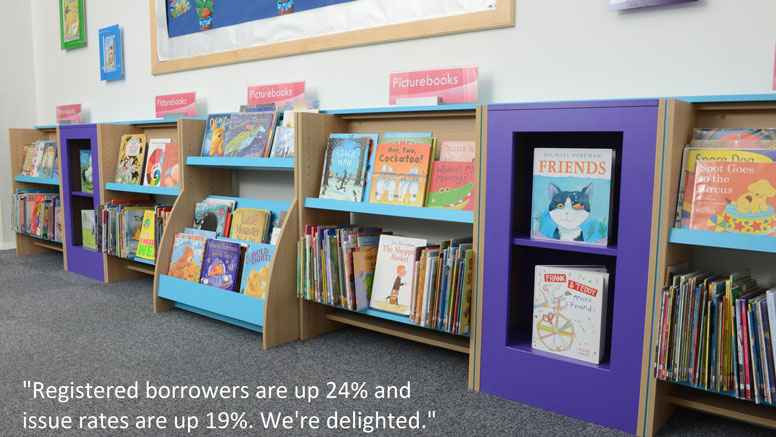 BookSpace refitted the children’s libraries, independent of their associated adult libraries, adopting designs and layouts that were purposely created to be similar but respectful of each of their unique characteristics.

With registered borrowers increasing by 24% amongst younger children and issue rates up 19% it’s a success story that other authorities could embrace.

Each of the five children’s libraries had its own reasons for requiring a refurbishment. In the case of Kings Norton Library, it was a 100 year old Carnegie Library with the original oak shelving and a leaking roof! The brief to BookSpace was to get children, parents and carers excited about reading and books; to create a recognisably new space and to celebrate each of the libraries individual features.

A palette of purple and vibrant lime green was used across all five libraries and a mixture of fixed wall shelving and Mobile Bookcases combined with plenty of soft seating ensured that the children’s libraries sat comfortably alongside their respective adult libraries (which hadn’t been refurnished) but also looked inviting and enticing to new young borrowers.

“We’ve seen a marked increase in the number of young borrowers using the library since we refurbished it,” says Jacquie Deeley, Library Manager. “In our Kings Norton library, issue rates for all ages for the 12 month period following the refit have increased by 19% which is just phenomenal. And across all of the refitted libraries, the number of registered borrowers has increased for all ages but particularly the under 4’s, where we’ve seen a 24% increase! We’re delighted.”